Draw Venn diagram to compare media of today and past. Share all your ideas on the
board. Revise the structure and features of comparison essay, which vocabulary should be used. 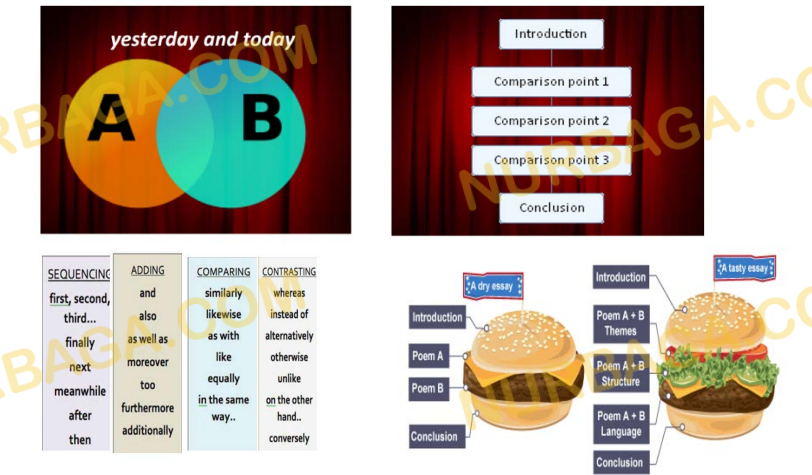 Have they been more or less reliable in the past? Probably neither.

In the distant past, all you had were newspapers and word of mouth about events (and often this word of mouth was based mainly on newspaper reports). Readers often did not have the opportunity to check the newspaper for accuracy or bias. However, looking back into history, we know that newspapers, and especially those controlled by major publishers, have distorted stories according to their own political agenda or bias.

After all, you had radio and television. But for the most part they belonged to the same newspaper sources or relied on them. And when you got into broadcast network television, it was limited to about 30 minutes or so to report stories from all over the country or the world. And again, one of the main sources will be news channels such as AP and UPI. So, for the most part, everyone was telling about the same story and showing similar bias.

Now you have several news organizations, both domestic and foreign, newspapers, radio, television, cable TV, internet sources, etc. And since news organizations, newspapers, radio, television and cable TV have their own internet platforms, it is much more likely that the “reader» can discover several reports and sources about the same event and, if they so wish, find out what is reported, what is omitted, what is distorted by means of comparisons. The media now has someone (actually everyone) looking over their shoulder to determine if they are accurate or biased.

Most of the media has not really understood this, so they continue to report what they choose in their own way and not report what they choose, discarding facts as they see fit and distorting stories to fit the agenda. And then they are left terrified that when their inaccuracies or distortions are discovered, they are somehow questioned, and many are not trusted.

It’s like Mika or whatever her name is on that morning show got upset because she thought someone was trying to tell the American public what they should think, and she thought it was her and the rest of the media’s job. This is a reflection of the past, when the media thought, “We report this, you believe it, and that’s it.” This is no longer the way of the world.